We are an uniqueness made by nuances™

Our innovative approach linking resilience and rating is ranked N.1 on more than 7.000.000 worldwide entries,(click here)

The real Geo-strategic question is about the dependence of foreign markets and the related vulenrability.

To find an answer we use The Country’s Interaction Capabilities Rating Instrument, (CICRI).

The USA are a lot less vulnerable than Germany, China, Russia.

Russia is the most vulnerable economy because Moscow exports essentialy energy and the trends till 2025 are not positive if we think that:

a) the GCC will increase the production

b) Iraq must increase

e) Venezuela must export to survive

That means a global offer that will reduce the Russian revenues, (along with the Saudi ones).

How the world main economies depend on export?

If we consider how export impacts on the most important economies in the world we see that the US economy is the more insulated from the global economy and this makes Washington either stronger and able to face commercial wars.

Just 13 % of the US GPD depends on the global economy. That means that every 100$ of GDP only 13 are made exporting when the world avarage is around 35 and around 50 for Germany.

What is the Geo-strategic meaning of this Geo-economic dimension?

It is quite simple: countries that are heavily dependent on exports are vulnerable to fluctuations in global demand

This especially from the world’s largest economy, (the US one).

Then, because a U.S. recession would decrease the consumers demand for goods this will affect their capabilities due to the fact that they will have less resources.

And again the US vulnerabilty is smaller than of the most powerful countries in the world, (and Russia is the weakiest among them).

In one sentence: the top countries in the world are most destabilized by a US recession than the US by thier recessions.

Keeping this on mind now we focus on the world economy using 2 other rating instruments:

This rating instrument is ranked N.2  on more on 175.000 thematic entries just after Oxfordeconomic and before Blackrock the biggest investment fund in the world, (click here)

Our approach is ranked N.1 in the world and it is a world novelty.

For us Geo-strategy is composed by 3  dimensions: Geo-politics + Geo-economics + Geo-perception.

It is a complex as well as dynamic enviroment that can be  graphically represented only using a 3D infographic like this one: 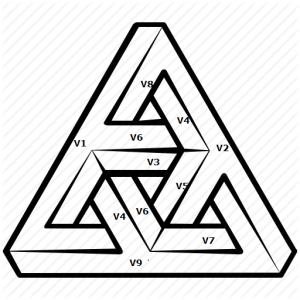 And that we describe as Quantum Geo-strategy.

This because we live in a quantum world ,(complex), and not in a binary one, (complicated).

The  vulnerability challenges is not a Geo-economic matter but a Geo-political one because affects  the doctrine of interdependence.

And Geo-politics is all about the Complex Interdependence.

On practical terms:  the countries that are more intertwined in the global economy  are the more vulnerable to events in other countries.

The tuning moment to realize this trend was the recession in 2008  and the next recession will  “just and simply” repeat this trend.

Whats is the Geo-political lesson in terms of Complex Interdependence?

Unlucky after 10 years of prosperity this basic lesson has been forgot by the leadership and on practical terms for countries like Germany and China it would be politically hard to reduce their dependence on global markets.

That will have deep internal political consequences affecting the world and not just the UE or the BRI.

And during this period the the U.S. business cycle will run.

Because the US economy is more insulated, (and then stronger), will develop on its own clock less impacted by others’ recession.

Keeping this on mind we look for the world economy in 2019.

Trade is the magic word to understand all.

It is not just about China-USA but also what happens if in the UE a new parliament will protect the European industries.

Brasilia is almost the half of the South American economy and the actual deeper bond with Washington can be a stimulus for the whole Western Hemisphere.

China starts to have problems to finance the BRI and the example is in Beluschistan where the KSA and the UAE investements of around 37 bilion dollars ,(plus the political engagement), are saving the China-Pakistan ,(Gwedar), Corridor.

It is not just a matter of conlficts but also of leverage power.

Haifa is the example.

Washington does not like the Chinese presence inside this harbor and Israel must  take a decision.

Beijing can, (pardon must), accept any decision also a negative one and to be forced to renegotiate the agreement.

On clear words: this means that the Geo-politics influences the BRI more than the Geo-economy.

But it is also about conflicts.

Look at Syria, for example, a potential market of not less then 250 billion US$ that we monitor with Weekly Syria Tracking that is ranked N.2 on more than 31.000.000 entries about Syria, (click here)

Iranian and Russian private companies not want to invest because frightened by violence.

And at wich point Israel and Iran will transform their war of attrition in Syria in a hotter one? What happens if Israel will annex territories in the West Bank?

Lybia could be stabilized under Haftari but if in Algeria we back to the civil war like in the ’90?

In Tunisia one big challanger announced to avoid to run for the presidential election. Why?

Tunisia should not be so instable but what happens if thousands of foreign fighters back home?

President Putin has just a 33%  positive score and the economy is not performing. Then he needs “external enemies” to distract the Russians.

What happens if Sweden will ask to be a NATO member after years of Russian menaces?

Expectations are a key driving factor and a Nobel Prize given on 2011 is here to confirm this comment.

Depsite all the (possible) negative Geo-economic and Geo-politic outlooks things seems to be a bit better if we read the reality under a Geo-perceptual dimension.

According to the March 2019 Mckinsey Global Survey : ” 56 percent of all respondents expect that demand for their companies’ offerings will increase in the next six months. Hopes for profits also are higher than they were previously, with 64 percent of respondents predicting their companies’ profits will increase over the next six months—up from 58 percent in the past two surveys.”

And we focus on a key element like the talent we descover that : ” scarcity of talent is a greater concern among developed-economy respondents”

A mix of knowledge, (to know things though information and academic curriculas), and comprehenion, (to undestand things though real life experience).

On practical terms: KNOWLEDGE that turns into UNDERSTANDING  able to generate CREATION = ACHIEVEMENT THAT LASTS

Once you understand you get the power to use your cognitive leverage.

To transform your knowledge into creation.

Then you can achieve all your goals!

If we consider this approach we can find out that creativity means knowlegde + understanding + fantasy.

If you know then you can understand.

And  once you understand you reach the borderline.

The limit of the existing state of the art.

At this point if you have fantasy you can cross this borderline and open a new world of opportunities setting new standards.

This creativity is what we describe as talent.

Question: is it possible that we set the wrong parameters to describe what talent is?

Then the real problem for the Outlook 2019 is not the crisis we face but the lack of ideas to solve them.

Opinions expressed in this document remain those of the author(s) and do not necessarily represent those of Resilient Rating.

Resilient Rating assumes no responsibility for the persistence or accuracy of URLs for external or third-party Internet websites referred to in this publication, and does not guarantee that any content on such websites is, or will remain, accurate or appropriate. As well as it is not responsable if reaching those websites you will have problems due to their contents.

The Author declared not potential conflicts of interest with respect to the research, authorship and/or publication of this article

The Author received no financial support for the research, authorship and/or publication of this article

Resilient Rating considers itself a public good and takes no institutional standpoint.

Anyone is free to republish and/or quote this post without prior consent.

Please provide a full reference, clearly stating Bruegel and the relevant author as the source, and include a prominent hyperlink to the original post.

Please avoid to modify the text.

RSS about what published